Somethings never change… Do they?

The enthusiasm that bakes your mood, while you have your favorite book in your lap, no matter the crackers that yell to pronounce the end of a year.  There is a lot to say about the year that gave us a wonderful experience, though the volatile memory could only remember a few of everything…

I was happened to read the above line, in a novel that I didn’t recall the title. And it came as a desire to me, to live for those days. It wasn’t so hard and, I gradually found myself loving it. I began to wake before the sun and make enough things to inspire the day. It is as if you add something invaluable at the start of your day.

It is great to start a year with memories that are meant something for me and, I’d like to thank everyone for making it easy to say such things…

And also, I’ve started to write a script.

On the morning of the tenth, the term ‘bitcoin’ amazed me. My memory of its existence aged five years from now, when it happened, quite accidentally to read a blog on cryptocurrency. Some said that it is completely volatile while some demonstrated that it is a bubble. When Warren Buffet quoted bitcoin as a mirage, My interest escalated to know about its existence.

After few hours on internet, I came to a conclusion that

Bitcoin is a black hole of the digital currency…

No one ever quoted the above sentence but I felt it at the end of my reading. The money becomes irrelevant as ‘time-in-space’ in the universe of cryptocurrency. Money goes into it and we could only multiply in terms of bitcoin.

Read the sentence below,

The trick or The truth…

Whatever it may be but if it happens, the investors will form a herd and as such, it becomes a giant bubble with lesser strength. I think that the economy in the near future will be more fragile than we’ve ever witnessed. But I agree with the fact that money should keep you happy instead to earn more with a load of tension…

If you ever buy bitcoin, make sure that you can handle the worst…

-Thank you for reading… 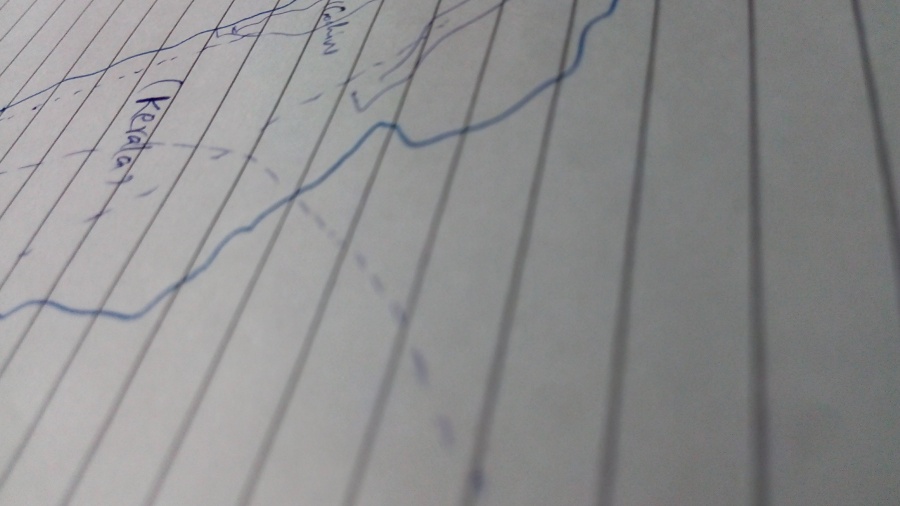 It is planned for as many days as it can take, Is it?

Although it inherits the most beautiful landscapes, nature is always said to be cruel. The ocean waves that does a joy-surfing or the desperate swim to save lives in the event of a storm. The past beauty now began to turn into a nightmare.

The Oukhi began in Lakshadeep and moved towards the coast of Kerala.

How could be the story of seven fishermen who died in the storm?

The one who couldn’t have gone if only he knew about the horrific storm or maybe he didn’t mind the tide. The other who went for another beautiful day in his work and ended up in the sea that fed him, all these years.

As I was watching the news, I almost could feel my map in complete chaos. I paid my respects to those who lost their lives in this unfortunate event.

I want to say that the life is precious (Although I didn’t know how much).  I’ve learned is that things are often tempting to be predictable yet no one knows how his/her today will end.

The choices we make are always in 0’s and in 1’s, like in the electronics. Both leads into a different situation yet we get the luxury to make the call.

So, it is over. An idea I’ve begun to write as a short story broke the rules of my ‘quarterly stories’ and ended with twenty-one thousand words in the block. I must say that it took longer than I thought.

I wish to write many books as possible with confidence and of course, with an excellent storyline. Good news is that I am planning for my Kerala trip in December and hope to enjoy the journey.

Special thanks to you for digital encouragement and my friends from whom some of the characters are inspired.

The book will be available as soon as possible.

A man walking on the street…
A tall, young man with improper gestures kept his one injured hand steady, while the other swaying to pace along the street…
A small boy caught the figure of a heavy man thumping the ground while passing through…
It was the pity that he wanted to see in the faces of the neighborhood, murmuring about how a good man like him could get injured, thought to consult him for any support at the sight of his injured hand…
Now, which statement could make the powerful impact…?
i would say the statement that focuses on the character. It is only possible when the author is in their shoe.
On the present note, not more than a week has passed that an Amazon guy left a book on my doorstep. It was for one of my roommates who had ordered a week before.
i always say that nothing is a coincidence. How could a stranger pass a book at exactly the same time that I was present and the other wasn’t? What are the odds…?
”A house for Mr.Biswas by V.S.Naipal.”
i strongly believe that there will be an appetite for every author. To be on the side of the one character and make a heroic appearance throughout the story, or to be on the side of none except the fate. The latter one resembles the non-fiction as every page is realistic yet ‘unadventurous for some people’.
i am half-way through that book, tempting to turn a page only to kill another chapter.
Writing is awesome only if i could see those classics arrayed on my shelf, waiting to be praised…
It would be great if you can comment me your classics and, i promise to do my best…

{And also, this is my 50th post. i love you all, without which my stories wouldn’t have served any purpose. This is the period of my life which i call it a devil’s puzzle. It keeps me engaged in my passion yet hard enough to keep track my financial career. If you’ve any advice, make sure to keep me updated.}

Once I’ve read that when little things make you happy, you can seek a paradise for yourself. Though I couldn’t map an exact context of the read, it had a great impact on me.  How couldn’t they…?

Writing a novel is more like a sailing a small boat in the middle of an ocean. Nobody would challenge you yet your free will entice you. It might be a passion, but more of the credit belongs to positivity. Although passion might make you row for several hours, a slight desperation for an invisible target would get you disappointed. Whether you find yourself as a Gulliver on the other side or not, It wouldn’t matter. A writer must always keep writing.  How couldn’t they…?

I have started my journey about a year ago, in a small boat with a strong arm. It is about the journey of a reporter and her boy in a chaotic world. While I am away, writing a piece of my novel, she called me after a long time. The character of which the ‘reporter’ is based on.., The brief moments of her talk made me realize that those little things weren’t just a coincidence.

And I took the liberty to compose the first Kindle edition on few of my short stories.

We always feel lucky to see the part of the world that inspires us.

I must say that I am quite grateful to breathe and see the works of David Fincher. Maybe he has captured every situation of our lives.

I happened to rush down four stairs of our office building on the evening of July the 12th. As the memory pushed me to remember my forgotten charger, I have no chance but to climb the stairs. It took another half an hour as my boss insisted on listening to his brilliant idea. As I have an enough comfort to leave the building,

Poets would have described the evening as calm as still water until it went cats and dogs. It came to a halt only to show me that I had no money in my pockets. I walked to the nearest ATM and as it was a late evening, it consists of notes worth two thousand rupees. My eyes left the calm mood and began to find a way to get enough money for bus fare. It found the nearest bookstore midst the soaking weather,

“What do you want, brother..?” A young man asked, only after he removed his headset.

The shopkeeper gave a smile at the two thousand rupee note in my hand for a book worth about fifty rupees.

“You could’ve asked for a change,..” he said to me while I was leaving the store.

Only If I haven’t forgotten the charger,

Only If the ATM had one more hundred currency left,

Only If I haven’t had an impression that no one would give me a change for two thousand rupee note,

Only If I haven’t been kind to offer thirty rupees to a beggar on the morning run,

I wouldn’t have got the book.

It is an exact replica of a scene from the 2008 movie named ‘The curious case of Benjamin Button’ directed by David Fincher.

The book isn’t the greatest read but the process is…

I began to think that it might be how I’ve started to write quarterly stories.